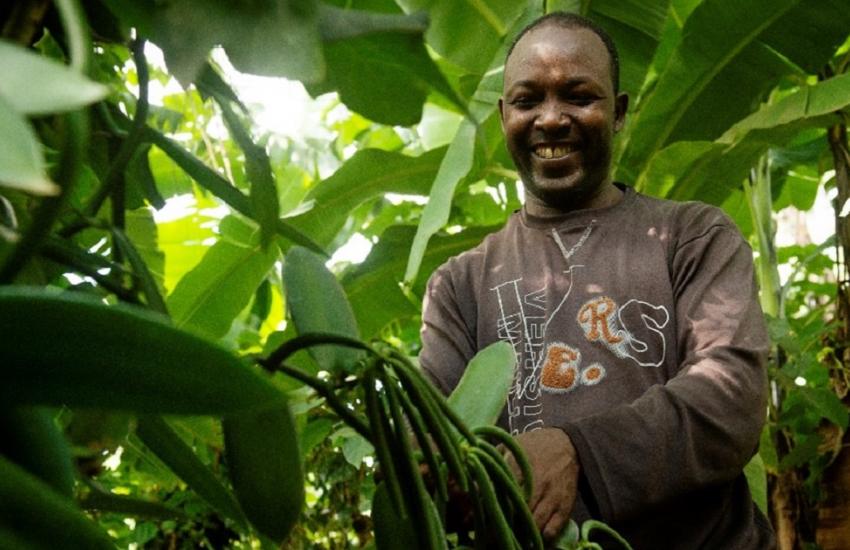 There is so much more to vanilla than what comes to the palate. Despite being one of the most recognized and appreciated flavors in the world, vanilla has a story that is unknown to most.

It’s a story that Fulgance Ndowo, agronomist at Natural Extracts Industries (NEI) knows well. With a background in Geography and Environmental Studies, Ndowo has been working for NEI since 2017, teaching farmers in Tanzania to plant, grow and harvest vanilla pods. He’s proud of his work and of the impact that it’s having on hundreds of smallholder farmers living at the foot of Mount Kilimanjaro:” Most farmers grow bananas or coffee, making USD 30-60 per month,” says Ndowo. “Vanilla allows them to get an additional source of income. Because of that, some have been able to pay for their children’s schooling, others to afford electricity. It makes me proud to see them happy.” In 2020, each farmer earned approximately USD 215 on average from their vanilla production.

The journey begins in 2011, when NEI started working with a group of 20 smallholder farmers who were, albeit unsuccessfully, attempting to grow vanilla. With Madagascar controlling over 95% of the global vanilla exports, building a vanilla value chain in Tanzania seemed daunting. Juan Guardado, Co-Founder and Managing Director at NEI, recalls how they didn’t have any growth for the first 5 years:” We had to plant the vines, train the farmers, wait for the vines to grow and set everything up.”

Ten years later, however, NEI works with 6000 farmers who own over half a million vines. Every morning, Ndowo travels to the fields by public transportation or motorbike to meet the farmers. He manages 547 farmers, in total, around several different districts. Because vanilla is still a relatively new crop for most farmers, Ndowo and the other agronomists from NEI have been training them on the whole production cycle. “Once the land has been prepared, we plant supportive trees to ensure that the vines have something to climb on, then we source the vines from other farms or from the nurseries and we plant them,” explains Ndowo.” It takes from 9 months to 1 year for the vines to climb the trees up to two meters and then drop down again; that’s when the farmers need to start looping them.”

The first flowers appear two to three years after planting the vines. If the farmers are not able to pollinate them, an external pollinator comes in and teaches them. Ndowo then shows farmers how to protect the vines from pests and even from chickens, who can remove the soil and ruin the plants. Nine months later, the pods are mature, and the farmers are finally able to harvest them. From there, the harvest is brought to the collection Centre or to the farmer champion, a community leader who facilitates the relationship between NEI and the farming community.

” Sometimes, if farmer champions do a really good job in the community, they get promoted to field officers for NEI, and they take a more active role in supporting and monitoring the production,” explains Neil Ashworth, Supply Chain Sustainability & Plantation Lead at NEI.

“It’s key to have a good relationship with the community,” continues Ashworth.” Farmers like to be taught and learn new things about vanilla, but ultimately they need that extra source of income, and we want to make sure that they get the most for their work.”

That’s also why NEI continues to research new ways to improve the production and experiment with new cultivation methods. The goal is not only to have a high-quality product that can be exported all over the world, but also to produce it in a way that is both sustainable and profitable. Currently average added annual income per farmer surpasses USD 200 per year, representing a substantial increase in income level for the poorest farmers, and more is expected as NEI continues to develop the value chain.

Eshimendi Urassa is a livestock farmer from Uswaa village, mainly raising goats and cattle. He started growing vanilla in 2010, when there was no market yet. NEI helped him to start making income from vanilla:” I started benefiting from the money I earned after selling my vanilla to NEI,” explains Urassa. NEI involvement in vanilla value chain achieves real and sustainable poverty alleviation.” Thanks to that money I was able to build a house and send my children to school.”

The relationship between NEI and the Common Fund for Commodities (CFC) started in 2019. Guardado recalls that there was a peak in vanilla price that year, mostly dictated by Madagascar:” Price volatility affects farmers the most. That’s why we always try to pay farmers upfront, it’s the only way we can guarantee them a regular income.” The loan from the CFC has allowed farmers to get paid as soon as they sell their harvest to NEI, instead of having to wait for the final product to be exported.

When the pandemic hit, NEI had a strong enough system in place to be able to help farmers to triple the production volume:” Of course prices dropped for several reasons including because of COVID, but by increasing the production we were still able to make a profit and pay the farmers well” says Guardado. As prices readjust and thanks to CFC’s support, in the next few years NEI will also be able to expand its production and exports while maintaining its core farm-to-market model.

“Vanilla is the second most expensive spice after Saffron. But for generations, the vanilla farmers of the world — mostly concentrated in Africa — have been plagued by poverty. CFC would like to go deeper to bust this myth. With NEI’s innovative arrangements like trainings on sustainable cultivation and processing of vanilla, CFC found it strategic to invest in opportunities like this. With CFC’s help, we hope, vanilla in Tanzania will play a big role to lift many smallholders from out of poverty.” described Ambassador Sheikh Mohammed Belal, Managing Director of CFC.

Developing vanilla chain needs time, patience, and resilience. For NEI and many smallholder farmers in Tanzania, it also requires dedication and, ultimately, reward, that starts from the fields in the Kilimanjaro region and ends in some of the world’s most popular desserts or in tasty dishes. In-between, there’s the opportunity for thousands of farmers to improve their lives and the wellbeing of their families and communities – something that makes vanilla more than an aroma and flavor. 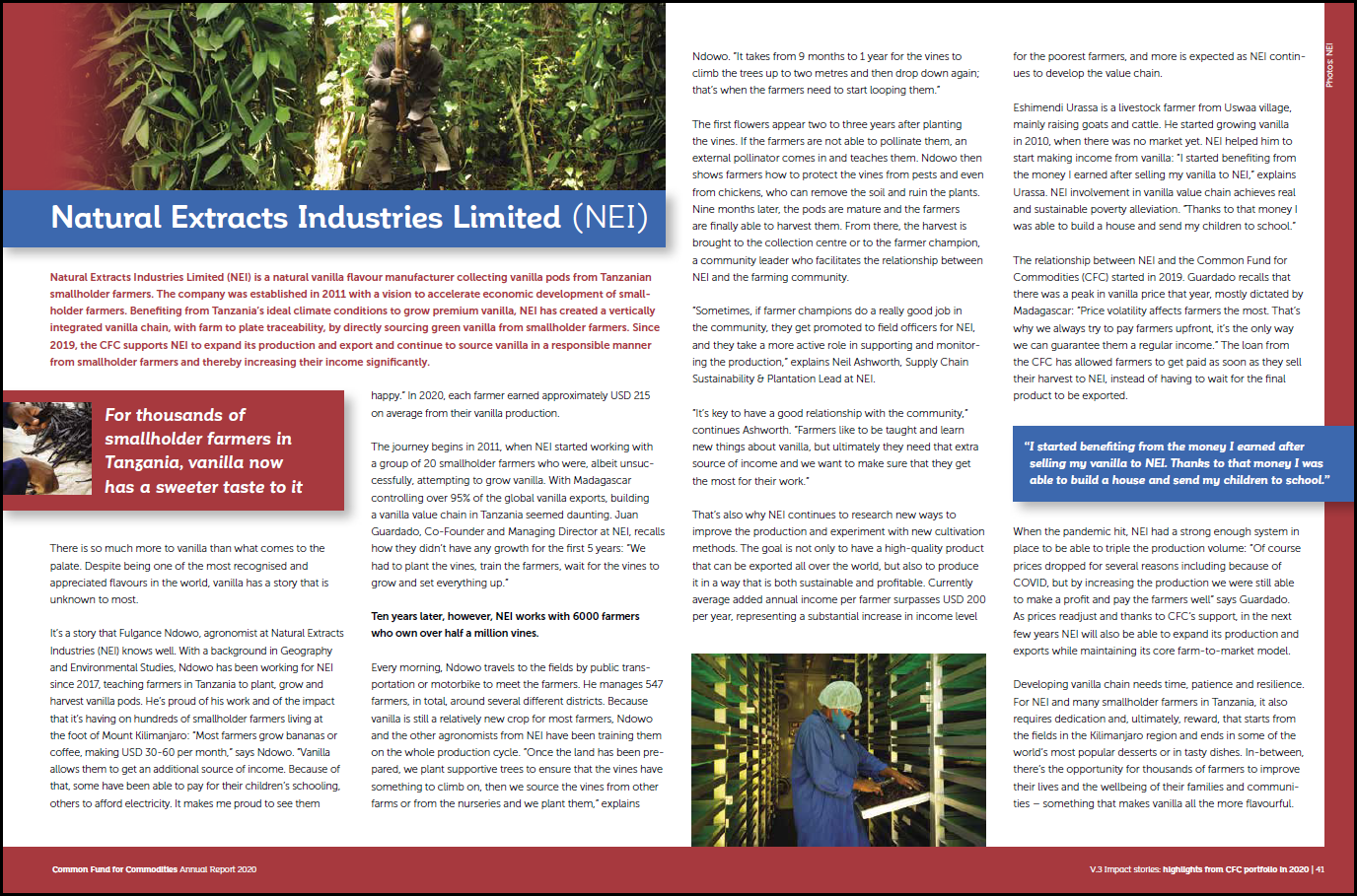