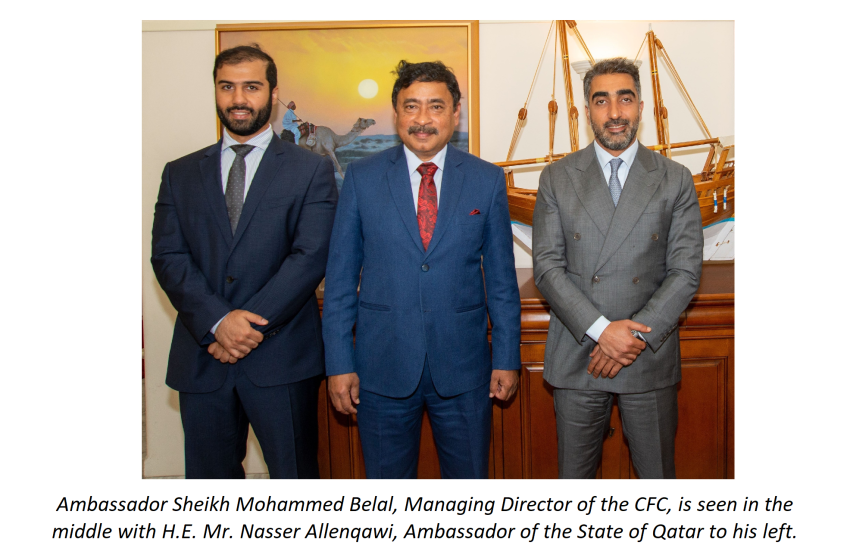 Ambassador Sheikh Mohammed Belal, Managing Director of the Common Fund for Commodities (CFC) met H.E. Mr. Nasser Allenqawi, Ambassador of the State of Qatar to the Netherlands at their Embassy in The Hague. They discussed the issues related to commodities and poverty at this challenging time of the pandemic and the war in Ukraine.

Ambassador Belal also shared with Ambassador Allenqawi on the ongoing initiative on the formulation of a fund titled CIIF (Commodity Impact Investment Facility) and thereby enabling CFC to contribute more for alleviation of poverty. Once formed, CIIF could also be an avenue for the State of Qatar to join this impact investment fund as an anchor investor.

The meeting further discussed various concepts of financing which may be of interest to commodity dependent developing countries. The concept of Islamic Finance and its potential to lower the cost of financing was also discussed. Ambassador Belal also assured to pursue more innovative outreaches in the days to come to make the services of CFC available to as many people as possible in the commodity dependent developing world, with a heightened sense of innovations and creativity.

Ambassador Allenqawi assured Ambassador Belal that the State of Qatar will actively consider the proposals from CFC and shall surely find a way to work together for the cause of sustainability.