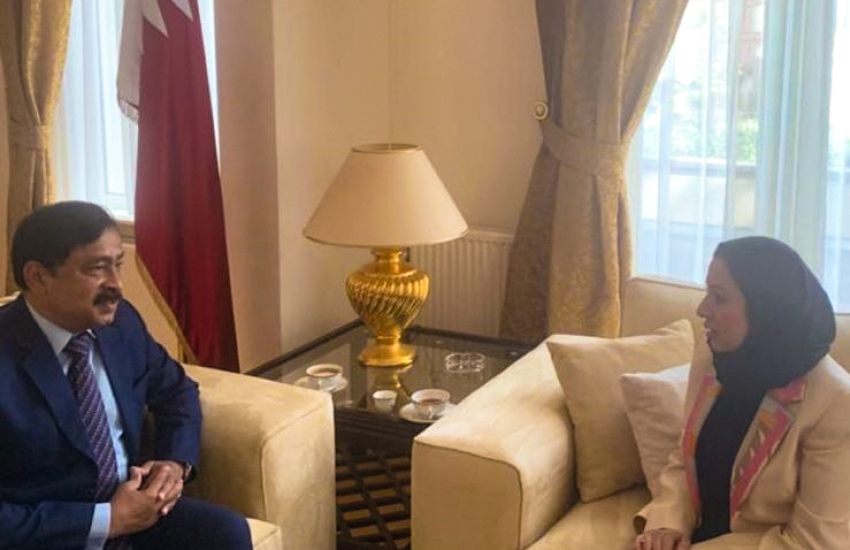 Managing Director of CFC visits the Embassy of Qatar

Ambassador Sheikh Mohammed Belal, Managing Director of the CFC, met with Ms. Hanadi Nedham ALShafai, Chargé d’Affaires, at the Embassy of the State of Qatar in The Hague, to apprise Ms. ALShafai of ongoing and future activities of the CFC for the alleviation of poverty.

Amb. Belal further apprised Ms. ALShafai on modalities of how the State of Qatar could become a member of CFC to build on their tradition of being one of the most generous countries on earth.

Ambassador Belal, while sharing the basics of the CFC’s structure and working process, also shared insights on how innovations in agriculture, which, in his views, are in abundance in the Netherlands and in the region, being used in the implementation of CFC’s projects.  Ambassador Belal also shared with the Ms. ALShafai, in response, stories from CFC’s projects where new innovations have been incorporated to bring higher productivity.  Ambassador Belal also elaborated on how a project led by a women entrepreneur in Africa has been able to provide much needed nutrition for children. The realization of nutrition security is perhaps a stark lesson of this pandemic that we all have been sadly going through. They also discussed other innovations that CFC is either implementing or contemplating to implement in the near future.

Ms. ALShafai expressed satisfaction at the workings of the CFC and hoped that the good work of CFC shall also, in the future, extend up to her own country – the State of Qatar. With neighbors like Iraq, Syria and Saudi Arabia already being members of CFC, it almost makes it incumbent on the State of Qatar to join CFC and enjoy the impact of the fund right away, Ambassador Belal added.  With their impressive socio-economic successes, the State of Qatar makes an ideal candidate to become a member of the CFC.

Ambassador Belal also congratulated the State of Qatar for being the host of the 5th United Nations Conference on the Least Developed Countries (LDC5) in Doha from 23-27 January 2022 as well as making Qatar an epicenter of attraction for billions of World citizen as Qatar hosts FIFA 2022 World Cup. In an exciting time like this, it is only rational recourse for the State of Qatar to join the CFC and thereby help as many people as possible to lift themselves from poverty. Ms ALShafai welcomed CFC’s outreach and assured to look into this as well as making voluntary contributions with the seriousness it rightfully deserves.