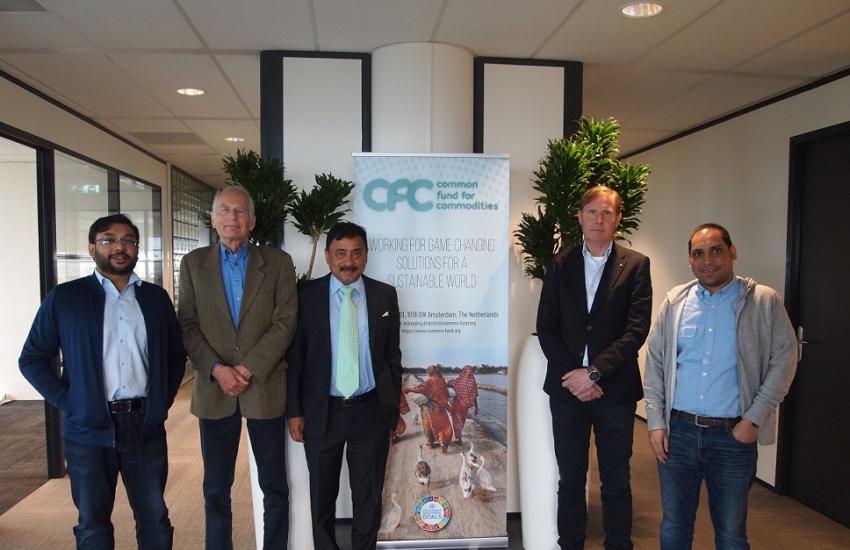 Mr. Bijon Islam, Chief Executive Officer and Mr. Ivdad Ahmed Khan Mojlish, Managing Director of Light Castle Partners, are seen with Managing Director Ambassador Sheikh Mohammed Belal at the Secretariat of the CFC. The two top representatives of Light Castle Partners came to visit CFC, for the first time, to know more about the activities of the CFC and its impact on the ground.

Ambassador Gerben de Jong, former Ambassador of the Netherlands to Bangladesh, was also present at the meeting. Ambassador Gerben, following his trend setting works in Bangladesh during his tenure in Bangladesh, in the aftermath of Rana Plaza collapse, exchanged with the Light Castle team and felicitated them for their good work. While urging them to remain focused on the poor as their livelihood and living even more challenging now.

Taking Advantage of the presence of Ambassador Gerben, Ambassador Belal discussed ideas on how organizations like CFC could be benefitted from success stories in countries like Bangladesh. They discussed propositions on how consumers and producers/farmers could be linked using digital and other emerging technological means. Given Light Castle’s wider portfolio mix, it seems feasible that they become a bridge between the developing and developed countries focusing on income and productivity drive for smallholders and SMEs in the agri-commodity sector.

Light Castle Partners, a Bangladeshi entrepreneur, was established in 2013 with a vision to inspire businesses in Bangladesh to advance the economy. The company has already consulted 150+ development partners & private organizations on 250+ projects, collaborated with 500+ SMEs & start-ups, mobilized U$ 50 million+ in investments and supported 40+ accelerator/incubator programs across Bangladesh. Light Castle also hosts the largest market and industry datasets in Bangladesh across 30+ industries.

CFC welcomed the representatives of Light Castle Partners with a presentation showing how poverty remains stuck around commodities and how the global economic system also made it difficult to ease the commodity dependency trap in LDCs and LLDCs.Ambassador Belal further briefed on the ongoing initiative on the formulation of a fund titled CIIF (Commodity Impact Investment Facility), and thereby enabling CFC to contribute more for alleviation of poverty. Once formed, CIIF could also be an avenue for member countries to join this impact investment fund as anchor investors.

Before taking leave, the representatives of Light Castle Partners assured that they will do their best to complement the good work of CFC and thereby bringing more resources for the working people at the margin. They concurred that without addressing the wider problem of poverty, the world shall remain far from sustainable and peaceful. They also agreed to work together towards this shared journey of sustainability in the days to come.

Ambassador Belal was accompanied by Mr. Andrey Kuleshov, Strategy and Development Adviser of CFC at the meeting.