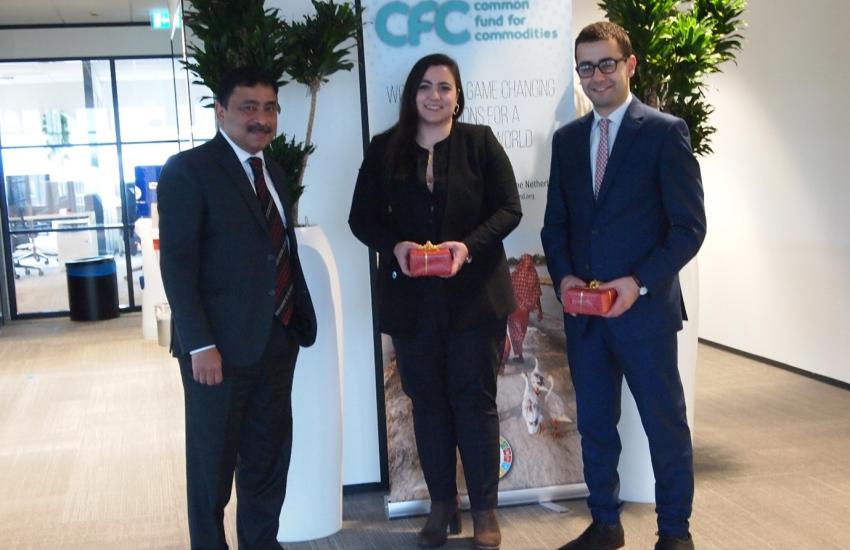 The Managing Director of the CFC met a delegation from International Alert, a UK-based NGO, working to build positive peace and to reduce violence across conflict lines for the past 30 years. Mr. Najib Bajali, Head of Peace Economies, is seen with Managing Director Ambassador Sheikh Mohammed Belal at the Secretariat of the CFC. Mr. Bajali, accompanied by Ms. Foteini Katzilaki, Head of Business Development, came to visit CFC, for the first time, to know more about the activities of the CFC and its impact on the ground. Ambassador Belal was accompanied by Mr. Andrey Kuleshov, Development and Strategy Advisor, who joined virtually.

The CFC welcomed Mr. Bajali and Ms. Katzilaki with a presentation showing how poverty remains stuck around commodities and how the global economic system also made it difficult to ease the commodity dependency trap. In addition, commodity-rich countries are often prone to conflicts which even further reinforce poverty for the local population.

During the discussion, several projects were presented showing the variety of CFC financial interventions. In particular, the financing option of developing impact bonds (DIBs) was found to be interesting and might be an option to explore further.

Ambassador Belal also briefed Mr. Bajali and Ms. Katzilaki on the ongoing initiative on the formulation of a fund titled CIIF (Commodity Impact Investment Facility) and thereby enabling the CFC to contribute more to poverty alleviation. Once formed, the CIIF could also be an avenue for private investors to join this impact investment fund.

Before taking leave, Mr. Bajali and Ms. Katzilaki assured that they will remain engaged and on the lookout for a possible future cooperation with the CFC.