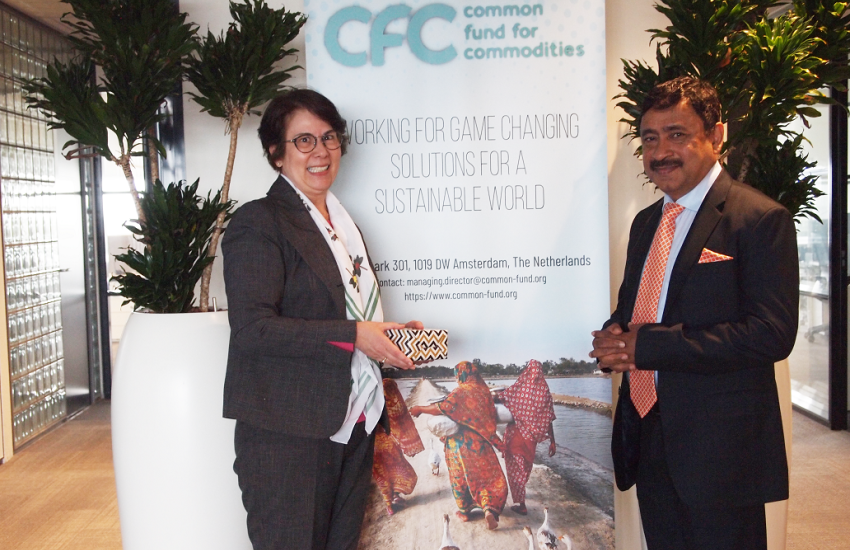 Mrs. Vanúsia Maria Carneiro Nogueira, Executive Director of the International Coffee Organization (ICO), came to visit the CFC shortly after her taking office on 1 May 2022 for an introductory meeting. The ICO, being one of the International Commodity Bodies (ICBs), has a long-standing relationship with the CFC.

CFC welcomed the Executive Director of ICO with a presentation showing how poverty remains stuck around commodities and how the global economic system also made it difficult to ease the commodity dependency trap in LDCs and LLDCs. Ambassador Belal further briefed on the restructuring undergone by CFC in the past 10 years to make CFC truly an impact fund with a sharpened focus on agri-commodities.  As an organisation dedicated to easing the commodity dependency of the developing world, CFC always remain on the lookout for deeper relations with an international commodity organisation like the ICO.

Mrs. Nogueira shared her vision of the development of the ICO in the next years and expressed her desire to have more active relations with the CFC in the days to come. Also shared innovative ideas that ICO is trying to introduce, under her leadership, to make the coffee value chain more resilient and sustainable.

Thanking Ms Nogueira for her aspiration for a more active relations with the CFC, Ambassador Belal shared with her few other recent initiatives of CFC. Elaborating on the much appreciated pioneering initiative of CFC tilted “Development Impact Bond (DIB)” and ongoing initiative  on the formulation of a fund titled CIIF (Commodity Impact Investment Facility), Ambassador Belal invited, Ms Nogueira and her network, to be a part of these innovative schemes to bring more income and resources for the commodity producing smallholders and SMEs. Once formed, CIIF could also be an avenue for member countries to join this impact investment fund as anchor investors.

Before taking leave, Mrs. Nogueira assured that they will do their best to complement the good work of CFC and thereby bringing more resources for the working people at the margin. They concurred that without addressing the wider problem of poverty, the world shall remain far from sustainable and peaceful. She also agreed to work together towards this shared journey of sustainability in the days to come.