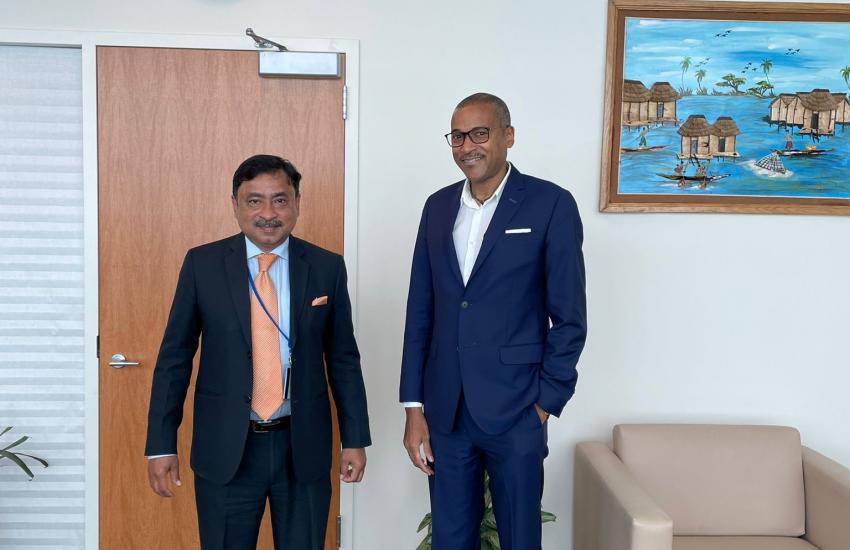 With over 30 years of experience in addressing issues surrounding commodity dependency in developing countries, Managing Director Ambassador Sheikh Mohammed Belal undertook a visit to New York from 9-12 August 2021 to consult experts in the United Nations system on how finance for sustainability could be made cheaper to address the problem of commodity dependency in the developing world. These discussions were centered around the modalities for expedited graduation of the LDCs. This focus is crucial as poverty is much more entrenched around commodities in the LDCs.

The issue of CFC’s engagement with the UN system and completion of affiliation was also discussed. Necessary follow-up action would be undertaken to complete the process that was initiated by CFC years earlier.

As the Office of the UN-OHRLLS (United Nations Office of the High Representative for the Least Developed Countries, Landlocked Developing Countries and Small Island Developing States) is working on the roadmap for the next ten years as a successor plan to the Istanbul Programme of Action (IPoA), CFC would like to see the following points are duly considered and addressed in the Doha Programme of Action:

The experts in the UN system advised CFC to consider more engagements with the UN system with joint initiatives to demonstrate how model projects could make a difference in the lives and livings of smallholders. The Office of the Special Adviser on Africa to the UN Secretary-General offered to partner with CFC for publication of such projects so that others would get interested to replicate such ideas in their countries.

CFC’s sustained efforts for projects involving cross border trade like COOPAC (between CFC, Congo and Rwanda involving the trading of premium grade coffee) and Olivado (producer of avocado oil in both Kenya and Tanzania) were highly appreciated. The idea of imparting transparency in the value chain, with innovation, technology and creativity, was highly encouraged. It was noted that CFC’s determination to bring transparency along the value chain to provide more income to the smallholder farmers and SMEs is essentially a priority for the UN system’s interest in order to provide higher income to the millions of smallholder farmers to alleviate themselves from out of poverty. CFC reiterated its commitment to remain focused on the issue of poverty alleviation using innovations and creativity in the LDCs, LLDCs and SIDS.

During the visit Ambassador Belal had the opportunity to meet and consult with:

[1] Credit guarantee schemes are mechanisms through which an external third party, known as the guarantor, promises to repay the lender all or part of the loan if the borrower defaults. When a credit is guaranteed, the creditor faces lower risk, and can offer better lending conditions and require lower collateral.