Visit by the Ambassador of the Republic of Uganda 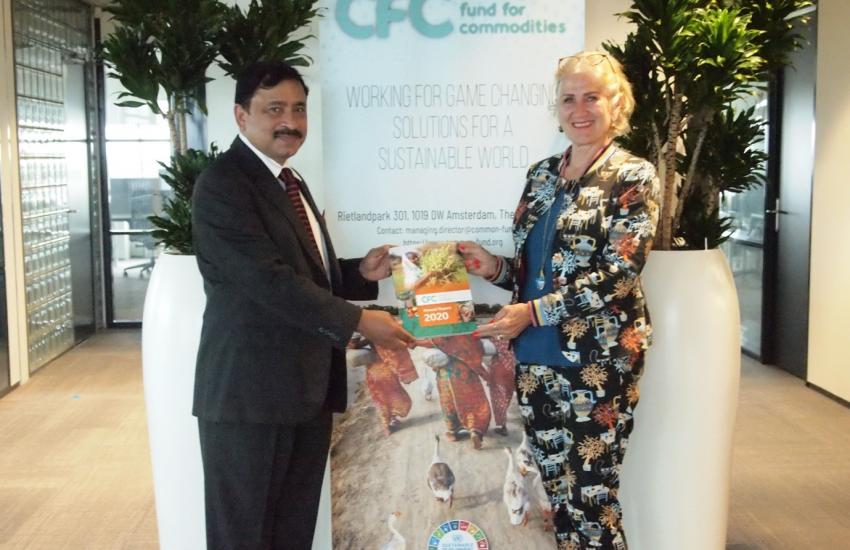 Visit by the Ambassador of the Republic of Uganda

H.E. Ms. Mirjam Blaak Sow, Ambassador of the Republic of Uganda to the Netherlands, is seen with Managing Director Ambassador Sheikh Mohammed Belal at the Secretariat of the CFC, during her first visit to the CFC offices to know more about the activities of the CFC and its impact on the ground.

Ambassador Blaak was duly briefed about the ongoing reforms that CFC is undergoing to serve the member states better in the days to come. Ambassador Belal elaborated on how CFC is trying to serve smallholders and SMEs , with priority to women entrepreneurs, in Africa  and sought help of a veteran like Ambassador Blaak to help scaling up CFC’s good work globally. Ambassador Belal wished to see more working relations and partnership with Uganda in the days to come. Appreciating Uganda’s good standing in the region and some of its hugely successful development projects, Ambassador Belal sought Excellency Blaak`s help to scale up CFC’s flagship projects in the the agri-commodity sector in the region, while exploring new initiatives in mineral and other sectors of commodities that will bring meaningful value chain upgradations for smallholder farmers and SMEs. If we are serious about poverty alleviation, we need to be sincere in addressing the root causes of poverty selflessly. Poverty alleviation is far more challenging when people look at poverty with a sense of charity, rather than restoring the dignity that we took away from those people, who are languishing in poverty for no or little fault of theirs.

Ambassador Belal also briefed Ambassador Blaak on how CFC has been working as an impact fund and its new initiative to form the Commodity Impact Investment Facility (CIIF) to scale up good projects that CFC have been implemented over the years. Ambassador Blaak expressed her satisfaction at the growing size and scope of impact fund globally.

With regard to the ongoing call for proposals by CFC, Ambassador Belal urged Ambassador Blaak to disseminate the information so that qualified SMEs/enterprises could submit quality projects from Uganda for consideration by the Executive Board of CFC.

Ambassador Belal assured to pursue more innovative outreach in the days to come to make the services of CFC available to the affected communities across the world.