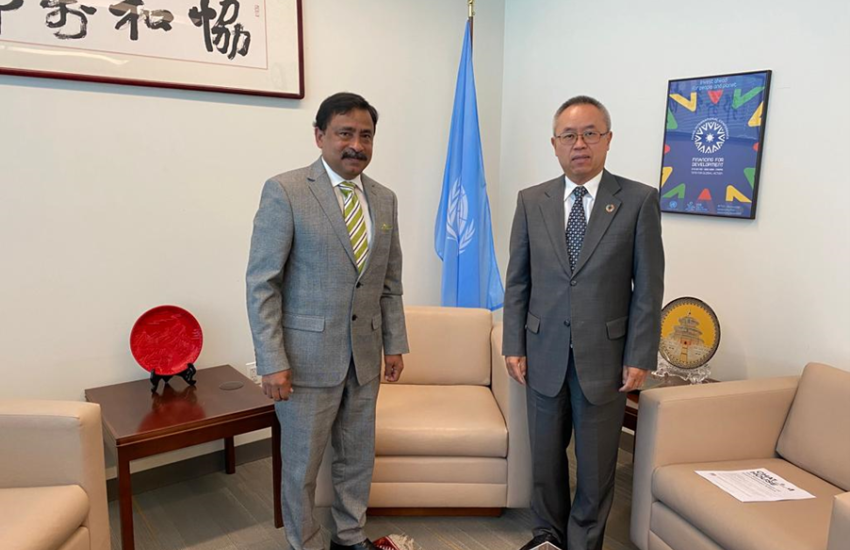 Managing Director of the Common Fund for Commodities (CFC) Ambassador Sheikh Mohammed Belal met Ambassador Li Junhua, Under Secretary General (USG) of the UN Department of Economic and Social Affairs (UN DESA) on 09 September 2022 in the United Nations Headquarters in New York. While congratulating Ambassador Li on his assumption of this high office, CFC MD also briefed him on the status and outlook of CFC's activities towards easing commodity dependence trap in the developing world.

Highlighting from the UNCTAD’s latest report on the State of Commodity Dependence 2021, CFC MD wished to see more strategic responses to the issue of commodity dependence[1]. Commodity dependence is almost entirely a problem of developing countries as it mostly affects those classified as least developed countries (LDCs) and landlocked developing countries (LLDCs) with Sub-Saharan Africa, South Asia, South America etc. being among the most affected regions.

UN DESA appreciated CFC’s work and wishes to reinvigorate this partnership for a renewed social contract for not leaving anyone behind. Rooted in the United Nations Charter and guided by the transformative 2030 Agenda for Sustainable Development, UN DESA upholds the development pillar of the United Nations.

CFC MD urged UN DESA to help commodity producing smallholders in the developing world through their research and business collaborations so that issues that hinder their access to global market, deter their technological transformation, value chain upgradation, product diversification etc. are duly highlighted. CFC MD also requested UN DESA to work for a reinvigorated and transparent system where conscious consumers will have more information about the producers who are working hard to serve them, feed them as they produce commodities in the developing world. Making technologies work to connect these conscious consumers and producers should be a responsibility for anyone who wishes to continue his human duty as an agent of impact, CFC MD added.

In a globalized world, we have to take advantage of the new found technologies like blockchain, internet of things and data science to adequately inform the generations Z and X so that our future becomes bright for all, instead for some. Ambassador Belal appreciated UN DESA for its painstaking work on hosting major global events and summits in the past decades, and hoped that it would also consider a summit on commodities at some point as eradication of poverty shall remain a pipe dream if issues of commodities are not duly addressed.

In response, Ambassador Li concurred that the issues of commodity dependence deserves more in depth studies and discussions. Accordingly USG advised CFC MD to get more intensely engaged with

The meeting was concluded with their mutual resolve to continue their partnership for sustainability.

[1] A country is considered to be commodity export dependent when more than 60 per cent of its total merchandise exports are composed of commodities.