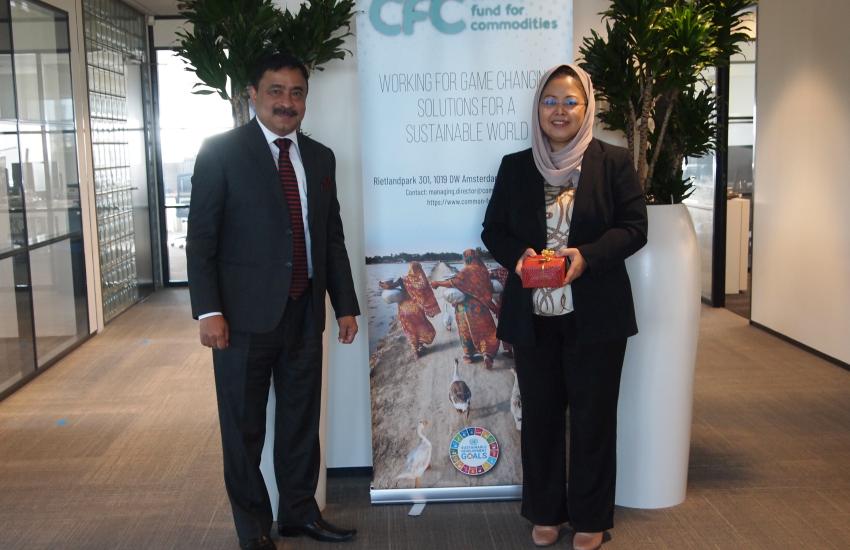 H.E. Dato' Nadzirah Binti Osman, Ambassador of Malaysia to the Netherlands, is seen with Managing Director Ambassador Sheikh Mohammed Belal at the Secretariat of the CFC. H.E. Dato' Nadzirah Binti Osman came to visit CFC, for the first time, to know more about the activities of the CFC and its impact on the ground. As a commodity-dependent country, Malaysia, as stated by Ambassador Osman, takes CFC with utmost importance. Malaysia expressed its readiness to do more for its people as well as for all poor people in the region.

CFC welcomed Ambassador Osman with a presentation showing how poverty remains stuck around commodities and how the global economic system also made it difficult to ease the commodity dependency trap. With examples from the price volatility of vanilla from Madagascar to cashew nuts in Africa and coffee in Indonesia, the CFC urged the Malaysian Ambassador to be a part of this journey of making commodity works for the development.

Ambassador Belal also briefed Ambassador Osman on the ongoing initiative on the formulation of a fund titled CIIF (Commodity Impact Investment Facility) and thereby enabling CFC to contribute more to poverty alleviation. Once formed, CIIF could also be an avenue for Malaysia to join this impact investment fund as an anchor investor.

Before taking leave, Ambassador Osman assured that she will do her best to bring good project ideas from her country and the region, and to promote the idea of impact investing as best as she could. Ambassador Belal urged Ambassador Osman to disseminate the information with business chambers, Ministries, and enterprises so that qualified SMEs/enterprises could submit quality projects from Malaysia for consideration by the Executive Board of CFC.

Ambassador Belal assured to pursue more innovative outreaches in the days to come to make the services of CFC available to as many people as possible in the commodity-dependent developing world, with a heightened sense of innovations and creativity.