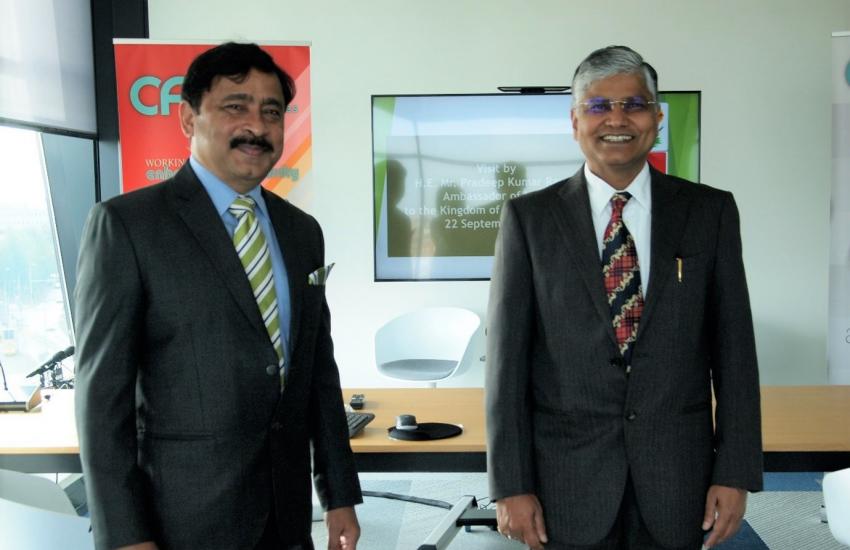 H.E. Mr. Pradeep Kumar Rawat, Ambassador of India to the Netherlands, is seen with Managing Director Ambassador Sheikh Mohammed Belal at the Secretariat of the CFC. H.E. Mr. Pradeep Kumar Rawat came to visit CFC, for the first time, to know more about the activities of the CFC and its impact on the ground. As a commodity dependent country, India, as stated by Amb. Rawat, takes CFC with utmost importance. India expressed their readiness to do more for their people as well as for all poor people in the region.

Welcoming Ambassador Rawat, Ambassador Belal briefed him on the current as well as probable future initiatives of the CFC during the discussion. Ambassador Belal elaborated on the elements, what he termed as green recovery in a post pandemic era, to help COVID-19 wrecked smallholder and SMEs to get to their feet at the earliest. Ambassador Belal wished to see more working relations and partnership with the countries in the days to come.

Ambassador Belal also briefed Ambassador Rawat on the ongoing initiative on the formulation of a fund titled CIIF (Commodity Impact Investment Facility) and thereby enabling CFC to contribute more for alleviation of poverty. Once formed, CIIF could also be an avenue for India to join this impact investment fund as an anchor investor.

Before taking leave, Ambassador Rawat assured that he will do his best to bring good project ideas from his country and the region as well as promoting the idea of impact investment as best as he could. Ambassador Belal urged Ambassador Rawat to disseminate the information with business chambers, Ministries, and enterprises so that qualified SMEs/enterprises could submit quality projects from India for consideration by the Executive Board of CFC, and to attend potential entrepreneurs from India to attend the CFC webinar sessions arranged for potential applicants to the CFC call for proposals.

Ambassador Belal also conveyed thanks, on behalf of CFC, to the government of India on their hard work to sponsor and eventually getting approved a resolution at the United Nations, by consensus, to celebrate 2023 as the year of millets. CFC always strived to work for those at the margin and in a post-COVID-19 milieu, this celebration will surely bring added attention to the issue of nutrition security as well. CFC remains steadfast is pursuing any issues that will not only ensure more income but also better health for our farmers and consumers.

Ambassador Rawat expressed his country’s desire to do more with the CFC for alleviation of poverty globally.