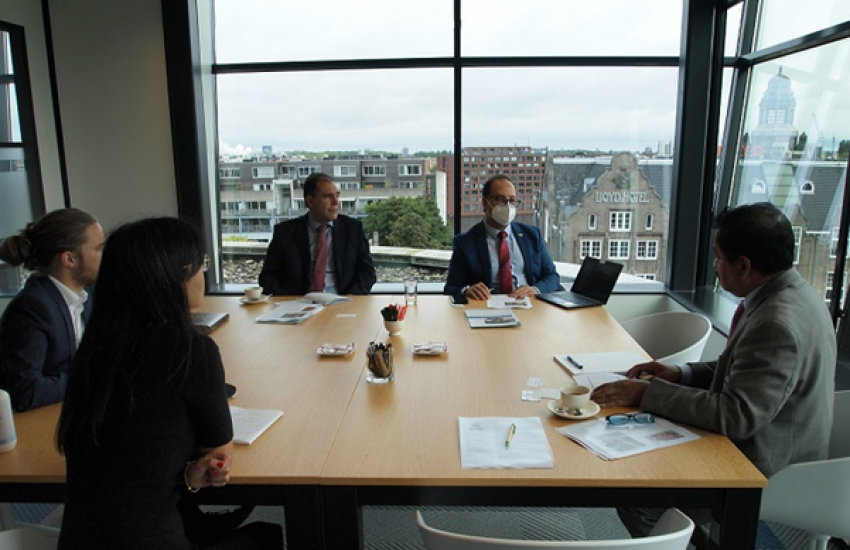 H.E. Mr. Arnoldo Brenes Castro, Ambassador of Costa Rica to the Netherlands and Mr. Alexander Roman Araya, Director and Trade Commissioner North Europe of ProComer, are seen with Managing Director Ambassador Sheikh Mohammed Belal at the Secretariat of the CFC. Mr. Araya accompanied by Ambassador Castro came to visit CFC, for the first time, to know more about the activities of the CFC and its impact on the ground. Ambassador Belal was accompanied by Mr. Peter Nielsen, Project Manager and Ms. Liz He, Junior Project Manager.

During the discussion, Ambassador Belal felicitated Costa Rica for its significant achievement in converting commodities as useful resources for the country. Accordingly, Ambassador Belal wish to see more projects from Costa Rica and thereby share their success stories globally. Ambassador Belal also felicitated ProComer, organization responsible for trade and investment in Costa Rica, for their trend setting works and hope to remain engaged for more transfer of technology in the days to come.

Ambassador Belal also briefed the delegation from Costa Rica on the ongoing initiative of formulation a fund titled CIIF (Commodity Impact Investment Facility) and thereby enabling CFC to contribute more for alleviation of poverty. Once formed, CIIF could also be an avenue for Costa Rica to join this impact investment fund as an anchor investor.

Before taking leave, Ambassador Castro wished to continue this discussion in the future for greater collaboration between CFC and Costa Rica.