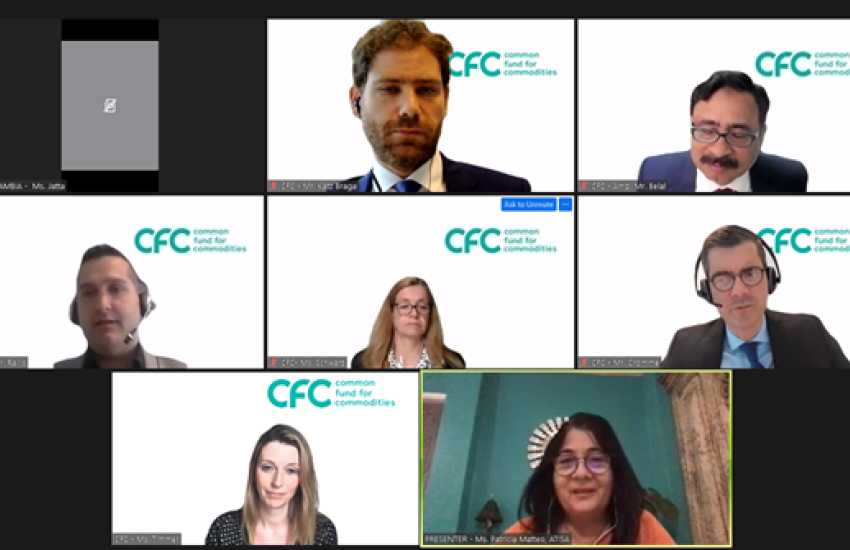 On 13 April 2022, the Common Fund for Commodities (CFC) held its 73rd Meeting of the Executive Board (EB) by teleconference. The EB reviewed five projects submitted through the 19th Call for Proposals and recommended by the CFC’s Consultative Committee (CC) in January 2022. After having carefully analyzed the projects, the EB approved all five projects, thus diversifying the CFC’s portfolio to commodities like dairies, sesame seeds, cashew nuts, groundnuts, cotton, and lime. These projects are based in Colombia, the United Kingdom, Singapore, Ghana, Ivory Coast, Nigeria, Burkina Faso, Chad, Guinea, Guinea Bissau, Mozambique, Tanzania, Togo, Uganda, Zambia, the last nine of which are Least Developed Countries (LDCs).

Another highlight of the meeting is the approval of SDG 13 (Climate Action) as a new CFC core SDG. During its 66th meeting, the EB approved the CFC’s new approach to impact management, adopting the SDGs as its impact framework and selecting five goals to be CFC core SDGs (i.e., SDG 1, SDG 2, SDG 5, SDG 8 and SDG 10). Since then, the issue of climate change has gained prominence in the international agenda, therefore leading the CFC to consider SDG 13 as one of its core SDGs. As a result, the EB approved the proposal, which will help signal the catalytic role of the CFC in addressing climate issues among its network, and to strengthen the CFC’s monitoring of climate issues on its portfolio, when relevant and possible.

The meeting was chaired by Ms. Anna Tofftén (Sweden), who after completion of her term,  was unanimously re-elected by the EB members for another year. The attendance of Member States representatives included H.E. Ms. Maria Isabel ENCOGE, Ambassador of Angola; H.E. Ms. Anet PINO RIVERO, Ambassador of Cuba; H.E. Dr. Pontšo Susan Matumelo SEKATLE, Ambassador of Lesotho; H.E. Dr. Naomi NGWIRA, Ambassador of Malawi; and Ms. Jie Chen, the Chairperson of the CC.

In his opening remarks, Ambassador Sheikh Mohammed Belal, Managing Director of the CFC, addressed the continuing disruptions in global trade and the consequences for those at the bottom of the pyramid. He thus reiterated the CFC’s sustained efforts in supporting SMEs in developing countries to navigate these challenging times with the adequate financial instruments. In this regard, the good performance of the CFC throughout the pandemic was recognized.

Amb. Belal also provided a brief overview of the CFC’s Impact Report, highlighting that 416,000 people stand to benefit from the loan interventions currently financed by the CFC, and that some enterprises reach female participation rates as high as 80%, thereby providing a path to economic equality for all. As such, he emphasized the CFC’s commitment to measuring impact in line with the best international practices and recognition for our progress in the global standard setting bodies, such as the Global Impact Investing Network (GIIN).

Ambassador Belal also urged leaders to consider a new kind of partnership between Europe and commodity dependent developing given Europe’s significant engagement in the trading of commodities globally. Ambassador Belal stated that “ we may not suggest Europe to produce their cars in DRC, but we would surely urge Europe to see how DRC could come out of exporting their valuable commodities in raw shape.” Only through aligning policy options and corporate loopholes, one single country in Europe could give as much as 8 billion pounds to a commodity producing countries a year, Amb. Belal added.

This EB meeting was also an opportunity for two CFC investees to present their businesses. The first was Torres/Jan Stap, a fruit trader based in the Netherlands that is vertically integrating parts of its sourcing by establishing a new lime plantation farm in the Bahia state, Brazil, for export to European clients. The second presentation was given by ATISA, a Peruvian shrimp producer supplying European and North American markets; it also holds a unique position as first Global GAP certified and second organic certified shrimp producer in Peru. Thus, such presentations are clear examples of the impact that the CFC creates by supporting SMEs sharing the same vision for sustainability.

Further, the CFC Secretariat provided the EB with an update of the CIIF. During its last meeting in December 2021, the CFC’s Governing Council approved the recommendations of the open-ended Working Group on Sustainable Fund Management. This has entailed the authorization for the Managing Director to register the CIIF as a legal entity, to set-up the CIIF Investment Committee, and to launch other administrative, legal and financial procedures. Moreover, six projects in the CFC portfolio have been identified for transfer to the CIIF portfolio, indicating a promising start for the Facility.

Looking at the outcomes of this 73rd EB Meeting, this represents an important step forward in the CFC’s endeavors for sustainable value chains. Not only the range of commodities and countries covered by the projects diversify the CFC portfolio to reach more farmers, but the inclusion of SDG 13 as a core CFC SDG paves the way for greater social and environmental impact.

Note to the editor: The Common Fund for Commodities (CFC) is an international financial institution established under the framework of the United Nations. The CFC provides financing for projects in commodity dependent developing countries to address challenges they face in the commodity value chains.