The Common Fund for Commodities (CFC) is an International financial institution, established within the United Nations (UN) ecosystem, with 101 member states across the globe. With poverty alleviation as its core mission, the CFC operates as an impact investment fund for commodity dependent developing countries. Headquartered in Amsterdam, since 1989, the CFC has been instrumental in bringing over a billion US dollars’ worth of investments for Small and Medium Enterprises (SMEs) and smallholder farmers, while acting as a bridge between developed and the developing world following the sustainability roadmap.

CFC’s Impact Investment Manager is responsible for the origination, assessment and implementation of predominantly debt investments for small and medium size enterprises across the agricultural sector in CFC’s member countries.

The ideal candidate for this position would be an experienced investment manager with a network in the agriculture and food sector, and with some experience of and an interest in developing and driving CFC’s new deep green agri impact fund vehicle towards its launch – ultimately taking on a lead role in future fund management.

An empathetic understanding of those living in poverty combined with knowledge of technological and operational innovations in the agricultural sector related to environmental issues and climate change would be highly advantageous.

This is a full-time job with residence in Amsterdam, however, partial home working arrangements may be possible for qualified candidates. The candidate will join a small team of dedicated impact investment and technical assistance professionals in a modern office environment. The CFC pays an attractive compensation based on United Nations grade levels, including a tax-exempt salary and additional benefits. Remuneration is being offered at the ICSC P-2/P-3 level with the level of appointment based on existing qualifications and experience.

The Impact Investment Manager will work as part of a small, dynamic team with responsibility for:

Applicants should complete this short form and send a brief cover letter (max 500 words) and concise curriculum vitae, in English, to recruitment@common-fund.org.

It is important to note that the CFC can only employ nationals from its Member States. For a full list of Member States please refer to the “About us” section of the CFC website

Only shortlisted candidates shall be contacted, applications received after the deadline noted above shall not be considered for this role.  The CFC deserves the right to cancel this call for applications at any time without providing any reason.

Further details are available in the ToR. 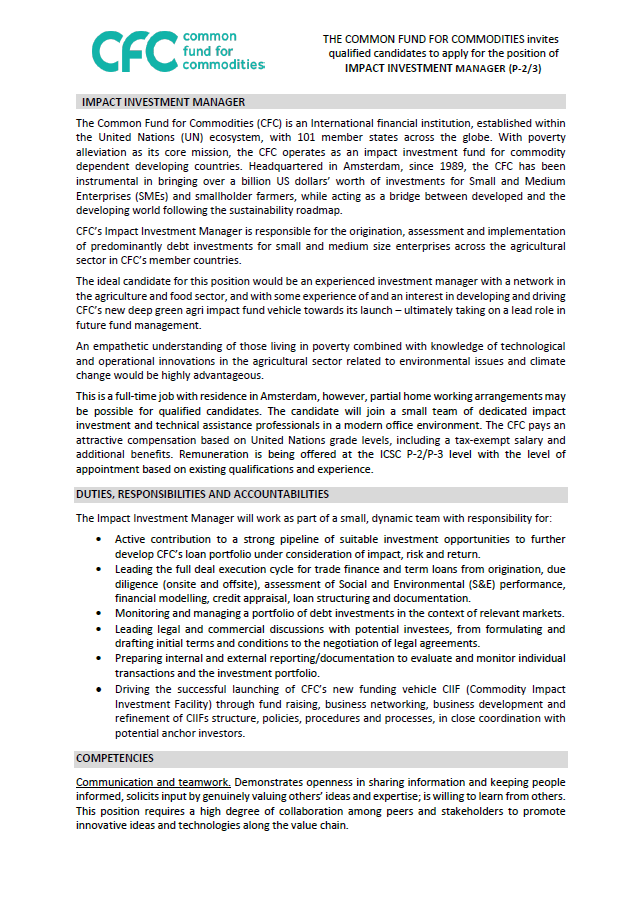